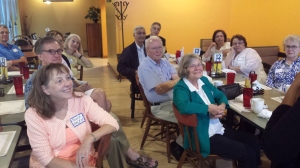 The Cultural Awareness Fellowship met on June 30th at KJ’s Curry Bowl on Madison’s west side to experience Sri Lankan food and learn about Sri Lanka. There was time for fellowship before the meal.  Twenty-three Rotarians and guests attended. A interesting buffet was served featuring 2 tasty appetizers and 2 different curries and rice,  concluding with mango ice cream and a unique pudding.  In addition to coffee and tea, a special Sri Lankan drink of avacado was offered.

Following dinner, the owner’s sister spoke to the group about Sri Lanka, from the time it was under British colonial rule until 1972 it was known as Ceylon..  It is an ancient country of 20 million people located in South Asia near South-east India. Its documented history is 3000 years old with some pre-historic relics dating back 125,000 years.  The country was involved in a 30 year civil war that ended in 2009 .  It is a republic with a presidential system.

Sri Lanka is a diverse multicultural country with many religions, ethnic groups and languages. It has a long Buddhist tradition dating back to 29 BC.  Coffee, tea, gemstones, coconuts and cinnamon are the primary products that are grown and produced.  A film was shown revealing the natural beauty of the country.  The speaker also shared some of her personal experiences when she came to the US in adjusting to the cultural differences.  It was a very pleasant, interesting evening.