Patty Loew, an Ojibwe scholar and UW Professor, described insights developed over many years of study of Native practices and beliefs regarding the land on which they live. These insights are common to members from all 12 Wisconsin Native nations. The unifying theme of land stewardship is that there is a spiritual connection with the land, the waters, the animals and the plants. They live close to the land, so they can be the first to recognize changes resulting from human practices and industry.

Christians, Moslems and Jews regard holy places such as churches as sacred, but they also have portable holy items such the Rosary or the Star of David. These followers of the Abrahamic religions have a disconnect in identifying certain bodies of water or wild rice as being sacred. The  entire society of the Ojibwe and Menomonee nations recognize that wild rice lasts forever and is therefore a super food when other sources are not available. In essence, Native peoples pray for sacred spaces that are necessary for assuring the continuation of life on earth.

When Europeans landed in America, it was necessary for treaties to be negotiated in order to preserve the right to hunt and fish. Restricted to Reservations of limited acreage, Natives knew that the Reservation would not sustain the people, so that hunting and fishing outside the boundaries would  be required. In recent years, other more dangerous intrusions have threatened the Natives existence. One example is the proposal for large open-pit taconite mines. The processing of this low-grade iron ore would result in sulfuric acid flowing into wild rice fields and potentially even into Lake Superior. The long-range vision of the Native religion considers how any decision would affect the seventh generation in the future.

The Ho-Chunk Nation in particular is concerned that Frac-Sand Mining is contaminating the air, the land and the water — all of which are considered sacred sites. Lung disease has been attributed to this form of mining. The Red Cliff Ojibwe are concerned that large industrial animal installations possess a real threat of manure contamination of land and streams.  The latest proposed legislation dealing with commercial land development that disturbs the Ho-Chunk nation regards the authority to excavate sacred burial mounds to determine if human skeletons are truly present. Unless one recognizes the religious beliefs and ethics of Native Americans, one cannot appreciate their viewpoint in opposing legislation that affects not only their interests but the welfare of the environment that includes all of us.

The Roast of Tim

The annual passing of the gavel turned out to be a rather poignant affair. Starting with the welcoming into the Past President’s club, to the thanks that went to all who guided Tim in his memorable year, there were tears and applauses galore. Tim passed out a year-end summary, which included a list of large-scale impact projects in which great progress was made.

The roast, co-chaired by Lee Schwartz and Mark Fraire, started with a Jump Around that had all the Rotarians on their feet in recognition of Tim’s strong Wisconsin roots. Then there was recognition of Tim’s most significant attributes, starting with his hair or lack thereof. His penchant to cry when moved emotionally was seen, not as a sign of weakness, but a sign of strength, love, caring and sexiness. His college exploits at Whitewater in baseball and table tennis were extolled.

WHAT IF…..Photo 1: “Tim” became a world star table tennis player; or Photo 2: “Tim” was a Rock Star interviewed on the red carpet by Tina Fey; instead, Photo 3:  “Tim” complains about his accounting homework at UW-Whitewater

While at Whitewater, Tim had some difficulties with his major in accounting, and had concerns that he might not succeed. So he thought of other possible fields of endeavor. Perhaps he could return to cheese-making. A long shot would be to play in a Rock and Roll band. What if a career in professional table tennis could lead to fame and glory? As he nervously pondered these possibilities, his accounting professor announced that he had passed his final exams. So then he applied for a job at several accounting firms – Enron, Arthur Anderson. Fortunately, they rejected his applications because a savior arose right here in Madison–J. H. Findorff & Son was looking for an individual with Tim’s unique talents. So today, Tim is living the good life in Madison, Wisconsin, with his wonderful wife, Lori, and family. Though he is still a young man, he has already achieved his goal of becoming President of one of the nation’s largest Rotary clubs. 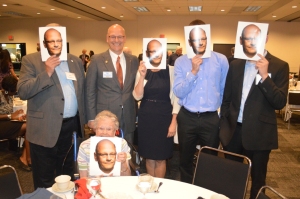