“It’s Never Too Late to Change” 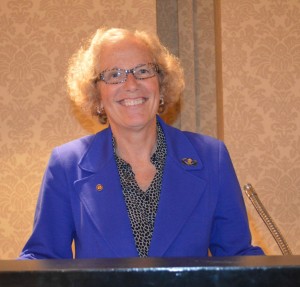 Keynote speaker Leslie Ann Howard, President and CEO of United Way of Dane County, delivered this message to a full house at the 51st Annual Madison Area Service Clubs luncheon on Wednesday, October 15, at the Sheraton.

Evidence that Howard’s message of changing the human condition is not only possible but happening today in our community echoed throughout the program.

Bill Battista, winner of this year’s Ruth Gordon Service Award changed the human condition for children in the West Madison Little League.  During his involvement, the Little League has grown to encompass participation of over 700 boys and girls in baseball and softball.  Giving kids positive encouragement makes a big difference in their lives and the lives of people around them.

Christine Hodge, winner of this year’s Community Youth Volunteer Award is helping to change the human condition by her focus on children’s education.  She is founder and Director of the Mt. Zion Academic Learning Center which provides after-school tutorial support for all children in the church community and throughout the Madison Metropolitan School District.

Howard noted that “making change at scale” is often less expensive and creates greater measurable improvements in real people’s lives than many of the traditional ways of addressing social needs.  Howard cited data in three areas of the United Way’s recent work.

The initiative called Housing First seeks to insure that homelessness is addressed at its root: keep people in their homes in the first place.  Research shows that once a person enters a shelter they only have a 37% chance of leaving it – that is, getting out of a support situation.  Instead, a smaller investment providing short term support to keep people in their homes results in an 80% chance of long-term independence.

Similarly with people reintroduced to their neighborhoods from prison there is a 67% recidivism rate without intervention.  Journey Home, another United Way initiative, cuts that to less than 5% with an annual investment of $500 per program participant.  By comparison it costs $38,000 a year to keep an offender in prison.

Finally, parenting skills are critical to getting children off to a healthy start in life.  Low income participants in the Parent Child Home Program with only two years of involvement find their kids graduate from high school at that same rate as middle income kids do.

There’s a lot to be proud of among the service providers and service clubs of the Madison area.  CLICK to view Neil Heinen’s recent editorial, “Service Clubs Continue to Thrive in Madison.”

Our thanks to Leslie Howard for her presentation and to Brad Hutter and Kristine Mirelle for providing special music.

This entry was posted in 2. Meetings, Rotary Weekly Guest Speaker and tagged Rotary, Rotary Club of Madison, Service Above Self. Bookmark the permalink.