UW System: The University for Wisconsin 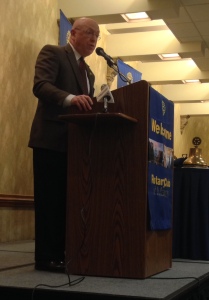 Cross referenced the statutory mission for the university and its charge to “educate and improve the human condition” by relating ways in which this can best be done when the State and University are partners.  A serious challenge is to get more students into and through the System and keep more of the graduates here to leverage economic success.

Looking at higher education as an investment, Cross cited statistics which speak to the need to think of the UW System as bringing a return on the investment.  Developing the state budget is a difficult process and the System is not exempt from hardship.  However, he described ways in which the university can and should be viewed as a long-term partner, not another state agency or expense.

A veteran of Rotary meetings, Cross divided clubs into three categories:  singing, non-singing, and singing but should not.  He did not say where our club should be classified, but he broke into song himself with a brief rendition of “Que Sera, Sera.”  For those not familiar with Doris Day’s philosophy of “whatever will be, will be”, it definitely does not describe the need Cross sees for the University to be nimble, flexible, and engaged as a partner in securing a bright future for Wisconsin,

As UW System President, Cross leads a workforce of some 40,000 faculty, academic and classified staff, and graduate assistants.  There are approximately 180,000 students participating in the colleges and universities and more than one million Wisconsin citizens are reached through outreach, public broadcasting and continuing education programs.  As he begins his second year as System President, Ray Cross exhibited why he was selected by the Board of Regents to lead Wisconsin Forward.  (Singing not included.)