Discussion on Updates to Madison’s Beltline 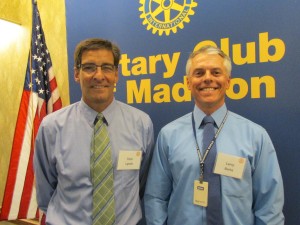 Two experts explained the planning and strategy for beltline improvements and changes on April 29. The first to speak, Larry Barta, has worked with the Wisconsin Department of Transportation for 31 years. He has managed improvement projects and corridor studies in all District One counties, including managing the expansion and relocation of 38 miles of I-39 from Dickeyville to Dodgeville. He began by noting that the most efficient traffic plan is the grid. In Madison, because of the lakes, we have a wheel, with heavy traffic on the “spokes” of that wheel. The beltline, which is under major reconstruction at this time, is very important and has several problems that need attention, including too many crashes, bottlenecks, and its age — it is simply too old. Half of the traffic exits are just 4 interchanges. New corridors on the northside of the city, including the North Mendota Parkway and a Waunakee corridor are important. Each day the Verona Road section handles 125,000 vehicles a day. An alternate route between Verona Road and I-90, south of the city, has been suggested, but the cost and impact make it impractical method of removing traffic. Alternate modes of transportation including bus rapid transit, express routes and commuter rail are being considered. Commuter rail through the isthmus and out University Avenue could remove some traffic from the Beltline. The DOT is working with Madison Metro, a separate entity, to plan improvements.

The second speaker, Tom Lynch, has been with Strand Associates for 23 years. He focuses on major corridor studies and environmental impact studies. He discussed “scenario” planning and explained “Madison in Motion” and the Sustainable Transportation Master Plan, including current plans and trends. Bus rapid transit and beltline bus riders could reduce beltline volume. Studying how people travel is important. Increasing use of public transit and bike use could be significant on the isthmus, but less so on the beltline.  The issue is important to all citizens and is being studied and addressed.