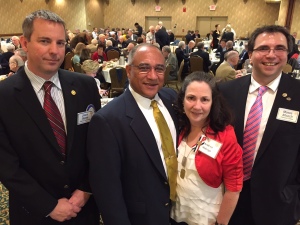 New Rotary member Jorge Hidalgo recounted the history and significance of Memorial Day in very personal terms. After the Civil War, in which there was a tremendous loss of lives, Decoration Day was established as a time to decorate the graves. In 1902, the name was changed to Memorial Day, a day to recognize soldiers who died in all wars. Memorial Day became a Federal holiday in 1967, and in 1968, the date was established as the last Monday in May. A special flag ceremony is prescribed in which the flag is raised to the top, then lowered to half-mast. In the afternoon, it is raised again. Starting with World War I and to the present, 617,448 American lives have been lost. Since 3/11/2001 in the global War on Terrorism, 6,845 lives have been lost.

Jorge is a graduate of West Point, and his three sons also pursued military careers. He described in personal terms the heartache sustained by those who lose a son in war. First he told of Richard Warner, a close friend of his son Jared from the Milwaukee area. Rich was in a Marine regiment serving in the so-called Triangle of Death in Iraq. He wrote to Daren about the wonderful children he met in Iraq. At age 22, he was killed by an Improvised Explosive Device. A video of his life from childhood to adulthood and then to his memorial service ended with a statement that it is an honor to have lived for others, not for one’s self.

Daren, born on 3/4/86, was an honor student and a wrestler in high school in Waukesha. After graduating from West Point, he took an additional year of training in Ranger school. He also went to Airborne school, and was trained to be a combat lifesaver and a hand-to-hand combat instructor. In 2010 his platoon went to Afghanistan. Before he went, his father asked him what his legacy should be if he were killed. His answer was to support soldiers who return as well as their families. Daren was injured when another soldier tripped a wire to an IED. His injury required antibiotics and treatment in Germany. He returned to Afghanistan, and during passage through a choke point, another IED took his life.

To honor Daren, the Hidalgo family has established a scholarship for a needy wrestler to attend college. Furthermore, the family has promoted the hiring of veterans and their families. They support various charities such as the Fisher House of Wisconsin that will provide housing for families of veterans in the Milwaukee Veterans Hospital. Rotary members were deeply moved by this personal tribute to two of our military who made the supreme sacrifice.