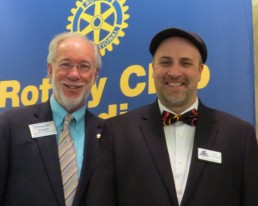 Rotarians and guests were enlightened and delighted with Scott O’Donnell’s (right) lively presentation about The Circus World Museum in Baraboo, Wisconsin, and his own lifelong fascination with the circus. Born in Canada, he claims to have moved to Wisconsin to escape  the harsh winters in Canada.

The program opened with President Ellsworth Brown wearing a clown nose while he introduced O’Donnell, Executive Director of the museum, which is a Wisconsin historical site. The music for the day was “The Man on the Flying Trapeze,” including a slide of the 19th  cemtury circus acrobat named Jules Leotard, whose name is used for the tights he developed.

O’Donnell did not have a circus background, as do many performers. Instead, he became interested in the circus as a child and turned into “the crazy kid at the back door of every circus.”  In college he studied Russian history but did his senior thesis on the animal rights movement in the circus.

He began his career as a clown, using dogs in his act. He refers to this period as having a “traveling dog pound,” relating how a woman left him “Tiny,” the largest great dane he ever saw.

Interested in show “business,” he owned his own circus for several years. He entertained the audience with circus history, including the origin of such terms as “making the nut,” or earning enough to pay the bills and get back the nuts which hold the wheels on the circus wagons. He also explained  the origin of pink lemonade, which sold much better at the circus than ordinary lemonade.

He described the daily programs at Circus World and other activities and features that await visitors. It seemed as if everyone in the audience wanted to head straight for Baraboo and the Circus World Museum. His presentation was about as much fun as a visit to the circus, but he left us all wanting more!