World War II: When Did It End? 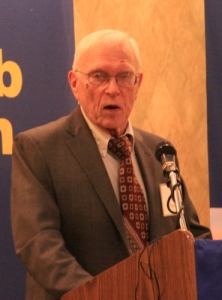 Professor Stanley Payne presented on the topic “WWII: When Did It End?” at our meeting on Wednesday October 14, 2015.  He is a professor emeritus of the University of Wisconsin Department of History and the author of several books on Europe and WWII, some of which have received national awards.

In this week’s presentation, Dr. Payne began by explaining Winston Churchill’s belief that the victory over Germany did not end the equally real threat of the Soviet Union, which controlled half of Europe, upsetting the balance of power that Britain and other democracies needed to survive.  In December 1944, Churchill launched “Operation Unthinkable” to push Russia out of Central Europe by force after the defeat of Germany.

The Polish Government in Exile, with its 200,000 troops, and even a sizable portion of German POWs were willing to enter armed conflict with the USSR after V-E Day but the idea received no support from the US leaders, with the exception of General George Patton.  And thus, a hot war turned into the Cold War.

Since 1945, it has been an age of civil wars in Eastern and Central Europe, the Middle East and Asia including America entering those in Korea and Viet Nam.  In fact, unusual for wars since the Middle Ages, there was no peace treaty in Potsdam following WWII.

Thus, Churchill was correct.  Victory over Germany did not really end the war.  Although the later fall of the Soviet Union decreased that country as a single threat, the civil wars have continued, particularly in the Middle East.