“He Was a Different Kind of Giant” 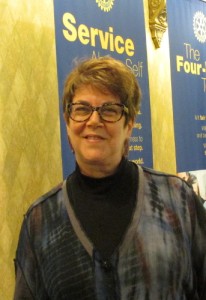 Wednesday, November 11, marked 77 years since Kristallnacht, the deadly attack against Jews throughout Nazi Germany and Austria which is considered the beginning of the Holocaust. Club President Ellsworth Brown noted that 20 years earlier, November 11, 1918, was when the armistice was signed ending World War I.

On this important anniversary of division and reconciliation events in history, Rotarians celebrated the memory of Manfred E. Swarsensky, a member of our Club until his death in 1981. Rabbi Swarsensky’s legacy remains with us as a model of human behavior and a call to action.

Our speaker was Hannah Rosenthal, CEO and president of the Milwaukee Jewish Federation and a former member of our Rotary Club. A student and mentee of Rabbi Swarsensky, Hannah has carried on his legacy of building relationships within and between communities.

Hannah’s father lived in Mannheim, Germany, when Swarsensky lived in Berlin. As a girl, Hannah often heard her father speak about Swarsensky’s wisdom and oratorical skills. She was thrilled when her mother announced one day that Rabbi Swarsensky would be coming to dinner. Hannah got dressed up and asked for the honor to open the door for him. She wanted to greet the ancient wise man she assumed must be “at least 10 feet tall.” She was surprised when she found that he was not even half that tall. “He was a different kind of giant,” she explained.

Over the years, Hannah had the honor of working and studying with Rabbi Swarsensky. She described a few remarkable characteristics that defined him and his legacy.

Rabbi Swarsensky was resilient. In Germany he watched his synagogue be burned and his congregation tortured and killed. He was arrested by the Gestapo. He came to the United States with every reason to be bitter, but he was not. Instead he dedicated himself to working for reconciliation.

In 1970, thirty years after leaving Berlin, he went back and visited his father’s and grandfather’s graves, and he spoke to Jews. He knew he was there to speak to the importance of reconciling with one another. When he returned to the United States, he increased his ecumenical activities. Unlike many of his colleagues, he was willing to marry inter-faith couples. He taught at Edgewood College, a Catholic institution.

Although Swarsensky treasured reconciliation, he believed that all people should bear witness to horrendous incidents of cruelty throughout history. Through these horrors we learn lessons. If we don’t learn the lessons of the holocaust, it is bound to be repeated.

Swarsensky also believed we all should leave something behind that matters. We need to communicate to our children the fundamental values of who we are, who we want to be and who we want them to be. He said we will find out about whether there is an afterlife “when the time comes.” But our legacy will live on long after our life is over if we teach, preach and live by our values.

Rosenthal concluded that we need to call out rhetoric or actions that are divisive and dangerous, and we need to reach across the divide and seek reconciliation.

An award-winning documentary video, “A Portrait:  Rabbi Manfred Swarsensky,”  was created and produced by Rotarian Dick Goldberg with assistance by Wisconsin Public Television in 2000.   This film received a national bronze Telly Award for best short documentary.

One response to ““He Was a Different Kind of Giant””