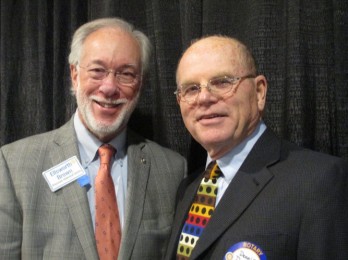 Is conflict between workers and employers inevitable?  Professor Dennis Dresang, UW-Madison, did not answer this question so much as he gave us background and information to help us reach our own conclusion.  Dresang, Professor Emeritus of Public Affairs and Political Science, is the Founding Director of the LaFollette School of Public Affairs.

Covering a wide range of economic and political topics from the “company town” of which Kohler, Wisconsin, is widely cited as one model, to W. Edward Deming’s “Quality Management” approach in post-WW II Japan, Professor Dresang presented a chronology of labor/management disputes; one of which preceded Wisconsin Statehood (1848).  Many of us could recall when Kohler (1954-60) or Hortonville (1974) were in the news, but most of us needed Dresang to provide details of some of the other conflicts.  In 1886 when Governor Jeremiah Rusk mobilized the militia, 16,000 workers were on strike at Milwaukee Bayview’s Rolling Mills plant.  Seven protesters were killed and a number wounded.  At the Fox Valley Mills strike (1898), Attorney Clarence Darrow successfully defended the workers.

No talk on the History of Labor Development in Wisconsin or any other state would be complete without recognizing the depression era work of UW Professor John R. Commons.  Dresang covered the worker issues and working with employers required to accomplish the Worker’s Compensation Fund, a national model.

The Wisconsin Idea was not mentioned during the program, but in the opinion of many, Dresang epitomizes what most citizens think of when that phrase is used. While a teacher and administrator at the UW, he has been called upon numerous times to lead a task force by appointment of a governor or by city and county officials when his academic expertise was needed.  (See last week’s write-up in Rotary News for some details).  One particular assignment was while he was on leave in 1976-77 to direct the State Employment Relations Study Commission.  If time had allowed, Professor Dresang would surely have received questions on that topic.

If you missed this presentation, CLICK to watch it online.