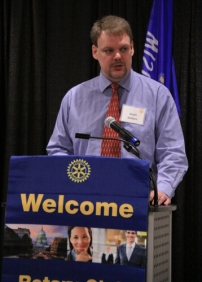 The Wisconsin Alumni Research Foundation (WARF) is a household word to many Madisonians, but few know the story about how a clash of two titanic egos during 1959 and 1960 shaped today’s organization. Kevin Walters, a historian in residence at WARF, unfurled this little-known story in a talk titled “How to Handle Harry Steenbock.”

Created in 1925 as a private non-profit organization, WARF’s mission was to support scientific research at the University of Wisconsin-Madison by securing and commercializing patents from the discoveries of UW researchers and then making their royalty income available for further research—what Walters called a “cycle of innovation.”

But two talented men, Harry Steenbock and Thomas Brittingham, had very different visions on how WARF should evolve.   In 1923, Steenbock, a brilliant biochemist, invented a process to increase the Vitamin D content of food by irradiating it with ultraviolet light; he was confident that this process could eliminate a crippling bone disease called rickets.  Eager to realize this potential, he secured a patent and gave it to WARF.   This was WARF’s first big money-maker.

Thomas Brittingham, a UW-grad and the heir to a lumber fortune, became WARF’s first vice-president, and used his investment talents to multiply WARF’s royalty income and his position to shape policy.

During WARF’s first decades, Steenbock and Brittingham got along, but then Steenbock insisted that WARF’s revenues should be limited to scientific research.  Brittingham thought the organization should support the best interests of the university including the construction of campus buildings.

In 1959 the simmering feud between the two men turned personal and ugly.  Then on April 16, 1960 a massive heart attack felled Brittingham, just 61.  His death softened Steenbock’s ire, but not his fundamental position.

In the wake of this confrontation, UW leaders realized that both concepts were necessary for WARF and the UW-Madison to realize their extraordinary potential.   Today, WARF is nationally esteemed as a highly successful engine of technology transfer and a “margin of excellence” for the UW-Madison.   And, according to Walters, the Steenbock-Brittingham clash 55 years ago deserves some of the credit.