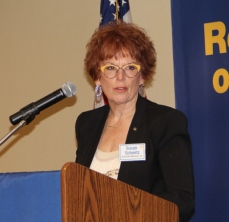 Downtown Madison Inc (DMI) started over forty years ago as urban sprawl to the east and west began to intensify. Three of DMI’s four founders were Rotarians and members of the Greater Madison Chamber board. As DMI grew it separated from the Chamber to become a self-sustaining entity. Two of its signature initiatives have successfully entered new generations: Frostiball is in the care of Overture and Paddle n’ Portage is carried on by Isthumus.

Bounded on the east by the Yahara River and on the west by Camp Randall, the originally platted in July 1836 for the City of Madison is used today as bounds for Downtown Madison, Inc. (DMI). The University of Wisconsin and the State Capitol Building, connected by State Street, (along of course, with the Rotary Club of Madison) were and continue to be anchors for Downtown.

Susan Schmitz, Executive Director of DMI, underscored the importance of downtown when she said there are more people living in urban areas than rural areas for the first time in history. She then painted by number a picture of the current “State of the Downtown.” A sampling:

Much more can be added. Susan urged Rotarians to contact their alders to let them know our priorities and concerns so that they continue to make wise policy to govern the city.

Did you miss our meeting this week?  Watch the video here.