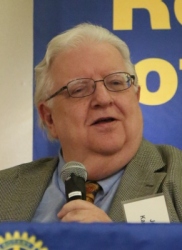 Alexander Hamilton is a “hot topic” these days.  With the incredible success of Hamilton: An American Musical, there is a lot of review and interpretation of this founding father and his role in history.  According to today’s speaker – Professor John Kaminski – Hamilton was a pivotal player at a pivotal time in our history’s foundation and early years.  However, the play offers a somewhat skewed image of Alexander Hamilton.  It mainly focuses on his positive attributes and contribution without offering much offsetting insight into this patriot’s well-established contrarian views in supporting a strong central government, active central government financial controls, and related topics.

Hamilton’s background as an orphaned illegitimate child and his minimal education continued to plague him throughout his career and contributed to his “fear of concealing his background.”  It has an impact on his personal philosophies and his resulting cautious approach to career advancement.  Hamilton’s personal introspection followed him all his life.

He played a key role in the Revolutionary War and joined President Washington’s cabinet as Treasury Secretary.  In that role, he and Thomas Jefferson, the Secretary of State, developed major conflicts on a number of topics.  Most of them involved a different vision of the role and structure of the United States government.  Hamilton preferred a strong Presidency and a strong congress.  He looked to Britain as the model.  He had earlier advocated for a President for Life and Senators for Life – concepts that were rejected by Jefferson, Madison and others in drafting the Constitution.   Jefferson, on the other hand, was more optimistic about the individual states and their citizens to guide the government’s role in shaping this new nation.

Perhaps Alexander Hamilton’s best writing can be found in the Federalist Papers that he authored with James Madison and John Jay.  This set of essays has been instrumental in revealing the insight that went into the wording of the Constitution.

Hamilton played a critical role in the Presidential Election of 1800.  Although he was not officially a candidate, he helped manipulate the process including trying to change the way the Electoral College picked a winner.  This was typical of Hamilton who used manipulation throughout his career to advance his own ideas.  Ultimately the US House of Representatives chose Thomas Jefferson as the winner.

In 1804, Hamilton and Aaron Burr fought a duel over personal honor.  Hamilton was mortally wounded.

Professor Kaminski’s review of Hamilton’s life clearly described a patriot who was radical and revolutionary – a risk taker who had a huge stake in the formation and early years of the US government.  We Rotarians owe him a debt of gratitude to shine light on this important founding father.

If you missed our meeting this week, you can watch the video here courtesy of WisconsinEye.