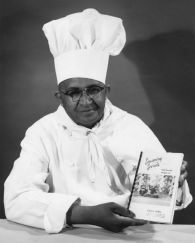 What happens when you live in a society where the government and the majority of the people show a complete disregard for social and civil rights? Well, if you’re Carson Gulley you defiantly march on in the face of adversity and accomplish greatness against all odds.

The son of a former slave from Arkansas, Carson Gulley came to Madison in 1926 at a time when Jews and people of color were not allowed to join fraternities or sororities, hotels and restaurants banned African Americans, and there were even restrictions on trying on clothes at a department store if you were a person of color.

Thirty years later Carson Gulley had become one of the first instructors of c
olor at the University of Wisconsin, had written cookbooks, and had become a celebrity chef with his very own radio and television programs co-hosted with his wife Beatrice. He traveled across Wisconsin and to neighboring states for speaking engagements, having to drive home right away because usually the town would not have a hotel that allowed people of color to stay there.

As Scott Seyforth noted, in 1954, Gulley was a speaker at our [then all-white] Rotary Club. It’s natural to think of Carson Gulley’s odyssey with admiration for his courage, yet one can’t help but think of the torment that he endured during a lifetime of discrimination.

Although he retired from the University after 27 years of service and after having been routinely passed over for promotion, he became the first African American to have a building named after him at the University in 1965, three years after his death.

If Carson Gulley’s life story is inspirational, let it also be a call to action to stand up against all forms of discrimination and make our country better tomorrow than it was yesterday–just as he did. That’s Carson Gulley’s legacy and that should be ours as well.

You can watch the YouTube video, “The Life and Times of Carson Gulley,” here.

One response to “Carson Gulley’s Legacy”