The U.S. Supreme Court and Its History 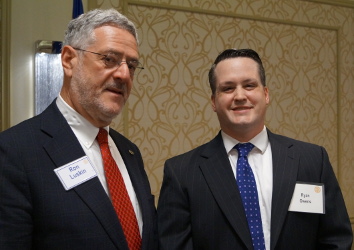 Professor Ryan Owens, a member of the UW Department of Political Science and an Affiliate Faculty of the Law School (and who is developing the Tommy Thompson Center on Public Leadership) spoke to the Club about “The Past, Present, and Future of the U.S. Supreme Court.” He began with an interesting “Thought Experiment.” With the addition of Neil Gorsuch to the Court, Justice Anthony Kennedy continues to be the middle or the median justice, often called the swing vote. But what happens if he retires, and if President Trump appoints a solid conservative such as Paul Clement, who is perhaps more conservative than Samuel Alito? In that case, the new median justice becomes Chief Justice John Roberts, who would then become the most powerful [influential?] Chief Justice since John Marshall. [Though he would be a very distant second.] If Ruth Bader Ginsburg were then to retire, Justice Alito would become the median justice. On the other hand, if Hillary Clinton had been elected, Justice Stephen Breyer might be the swing vote, etc. Very easily, a 6-3 conservative court under Trump might have been a 6-3 liberal court under Clinton. The presidential election of 2016 was, then, a very consequential election.

Professor Owens then wondered whether this was not a time for reforms to the Court. Two that he suggested were age limits on the justices, and perhaps requiring them to “ride the circuit,” as was once the case. The U.S. is the only common-law country without some limits on judicial tenure.

An age limit would remove the incentive for judges to retire “strategically,” so as to assure a like-minded jurist were appointed. It would also reduce the likelihood of justices serving while suffering from dementia. Attending circuit courts would let the justices see the consequences of their decisions and let the people see them in action close-up. It might also encourage the justices to retire earlier. [But would it also discourage people from taking an appointment?]

In answer to a question, Professor Owens said that he and a colleague were doing research on the age issue by studying oral arguments over the years to see if there is any evidence of dementia in sitting justices. He also questioned whether the Senate’s refusal to consider Merrick Garland’s nomination would not lead to further retaliation beyond the recent filibuster. He expects the Trinity Lutheran case, probably Justice Gorsuch’s first major opinion, to be an important decision.