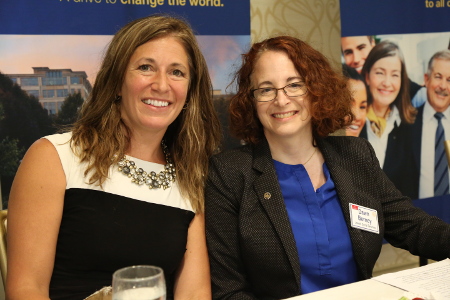 In 2015, Dawn Berney became executive director of the Madison chapter of Jewish Social Services and was immediately faced with the problem of settling Middle Eastern and African refugees in the community.  Although Jewish Social Services (JSS) has a long history of assisting refugees from the Holocaust, from Cuba and from the Soviet Union, the current wave of people fleeing conflicts in Syria, Afghanistan, Iraq and the Peoples Republic of the Congo raised unique challenges. With guidance from the national organization, the Madison chapter reached out to other agencies and non-profits to plan for cooperation in settling families in Dane County.

In 2016, JSS and Lutheran Social Services submitted applications to the State Department for assistance in carrying out this mission. The State Department gave permission to each organization to settle 50 persons. To place the problem in its proper perspective, consider that currently there are 20 million refugees in the world and 30 million in displaced-persons camps. Each individual who wants to come to the U.S. has to undergo background checks that proceed through 21 steps carried out by several federal agencies. The State Department decides who will be admitted. The local agency must then be prepared to provide a furnished apartment, financial support, child care, English as a second language, clothing, job preparation and general acculturation.

Commitment to providing these services places a great burden on the local providers. Volunteers are needed to help with moving, education, shopping, securing jobs, training in money handling and banking, health care and a whole host of other issues involving filling out forms for getting resident status. Fortunately, Madison has a long history of collaboration. Many Arabic speakers have stepped forward, as have lawyers, students, baby sitters, school district employees, people serving as guides and a host of other volunteers. In less than one year, 24 people have been settled in Madison. This is a remarkable achievement for the JSS–an organization with a staff of only nine employees.