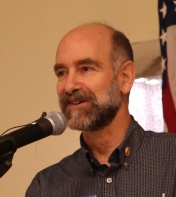 On July 12, Professor Jonathan Patz, Director of the Global Health Institute at UW-Madison and a pioneer in researching global climate change and its consequences (he has been active in national and international programs in this area for more than two decades and received a Paul Harris fellow award at the RI annual meeting in Atlanta last month when he addressed a break-out session on the connection between extreme weather events and the explosion of the Zika virus)  described the health consequences of global climate change and his proposals for addressing these issues.

He began by noting that increasingly high temperatures world-wide have significant health consequences.  Climate disruption causes extreme heat waves, increased air pollution and increases in insect-borne and water borne diseases.  It adversely affects food supply and mental health.  Among many studies cited was one noting that US cities are likely to triple their annual number of 90 degree days by mid-century.  Yet, it is not just hotter temperatures that create havoc; the water cycle is altered and rain will fall in stronger fashion than before due to the increase in hot air.

Professor Patz said climate change should be approached as a health issue and noted its impact on energy and the food supply.  He stated that while moving to reduce carbon emissions has a cost, that can be out-weighed by benefits, citing a cost of $30 per ton of removed carbon dioxide emissions being off-set by a benefit of more than $200 in the reduction of air pollution – pollution which causes 7 million deaths a year now.  Moreover, the costs of wind and solar energy are dropping rapidly.  He also cited studies indicating that simply substituting bike rides for auto trips of 2 and 1/2 miles or less in the summer could save 1300  lives annually as well as 8 billion dollars.  As to employment concerns, he noted that far more people are already employed in energy work not related to fossil fuels than are employed by the oil and gas industries.

Although the United States has stated it will be the only major nation not to continue to adhere to the Paris climate accords, it cannot officially leave the agreement until Nov. 4, 2020, and a huge number of US cities and other jurisdictions are expressing adherence to its principles and lobbying to continue to abide by it.  The new RI president has said response to climate change should be a major cause for the organization.  There is a moral issue here because poorer countries are most gravely harmed by climate change when they have been the least responsible for it.  Historically, the United States has been most responsible for the emissions that are a major cause of climate change although China now surpasses us in pollution  (China, however, is taking major steps to increase its reliance on solar energy.)

Professor Patz concluded by noting that full implementation by every nation of the goals of the Paris accords would be insufficient to resolve the problems created by it.  Individual citizens and non-governmental organizations must move to substitute cleaner energy for fossil fuel reliance and develop a healthier society.