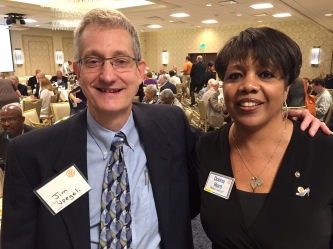 Beautiful and lovely is the story Jim Voegeli is telling of his father Don Voegeli, prolific composer and performer of music for public radio and television, theater, advertising, and educational and promotional films. Beautiful and Lovely is also the name of a children’s song Don wrote in 1964 about the beauty of nature and life as part of the radio series Let’s Sing.

Don Voegeli, music director at UW’s radio station, WHA, until his retirement in 1964, was a 50-year member of our club beginning in 1949. He is noted for 35 years as our club pianist preceding Jeff Bartell, who opened the program by playing one of Don’s songs.

Smiles were universal as we listened to Voegeli’s music and heard the story of his life and love of music. Though much of his music had been destroyed, through thousands of hours over the course of 3 1/2 years of researching, locating, and digitizing, many recordings have been restored.

Nods of recognition and appreciation accompanied the smiles when Jim played two renditions of National Public Radio’s All Things Considered theme song, the music Don is perhaps best known for composing. The newer arrangement we all hear on NPR today marks 45 years of Don’s music being the All Things Considered signature. We also enjoyed learning of Don’s 2-year hiatus from UW, when he headed to Chicago to write jingles, including the familiar Schlitz beer jingle featured on the 1950’s Schlitz Playhouse of Stars CBS television program.

Although Jim made it clear that the amount of information and music that could be packed into his short presentation was minute compared to the array of musical pieces that he would like to share, he didn’t stop with his presentation. 90 copies of a 4 CD set, entitled Beautiful and Lovely: The Music of Don Voegeli, were gifted to Rotarians wishing to reminisce and enjoy at home. Disc 1 contains full versions of the All Things Considered themes; orchestral versions are on Disc 2; the Schlitz jingle, film scores, and themes, jingles, and interludes are on Disc 3 and continued on Disc 4.

So if you missed the Beautiful and Lovely presentation, get a copy of the CDs, which Jeff Bartell says are “remarkable.” OR, you can watch when Jim Voegeli, and David Null, Director of UW Archives, share the Don Voegeli story, Don Voegeli and Wisconsin Public Broadcasting. Go to http://wpt.org/University-Place/don-voegeli-and-wisconsin-public-broadcasting

Did you miss our meeting this week?  You can watch the video here.

This entry was posted in Uncategorized. Bookmark the permalink.