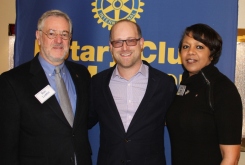 At Wednesday’s meeting, Professor Mark Copelovitch gave a highly informative presentation on the history and status of the UK’s planned exit (Brexit) from the European Union (EU) and its potential impact on trans-Atlantic relations.  Historically, the UK has had a tortuous relationship with continental Europe, but, after World War II, Churchill became the greatest champion of European unification.  Despite ongoing domestic ambivalence, the UK finally applied for EU membership, and was accepted in 1973, although the UK chose to maintain its own monetary system.   Subsequently, the EU continued its membership and economic growth for approximately 40 years.

However, the decade from 2007 – 2017 changed all that.  The global recession spawned the growth of isolationism, nativism, and right-wing political factions in much of the world, including the UK and the US.  Relationships with NATO and on-going trade partnerships have been challenged by President Trump, and some of the same economic, regional, and political schisms occurring in the US are taking place in the UK and other European nations.  In a political miscalculation originally intended to shore up his base and undercut competing factions, Prime Minister David Cameron called for a public referendum on whether the UK should stay in or withdraw from the UK.  On June 23, 2016, 72% of UK citizens voted in the referendum, and while the margin for exodus was small (52% to 48%), the consequences of the UK’s withdrawal could be monumental.

For example, the UK was strongly split on Brexit, with Scotland and Northern Ireland voting to stay and with London supporting the EU by an 80%/20% margin.  So potentially, these two countries could try to leave the UK, and many major financial institutions in London are looking to relocate in Europe.  Other European countries, such as Spain, are suffering similar crises, and there is a growing movement within the EU to establish trade and defense relationships apart from the US.  As Professor Copelovitch emphasized, the history of isolationism and protectionism is not a sound or peaceful one, so the US must be wary of exiting its leadership position on the world’s stage.  Since there is no actual legal requirement for the UK to exit the EU in March 2019, there is still the potential for a reversal.  Nevertheless, Brexit seems to serve as a warning signal for all nations to recognize that globalization is here to stay and can only be reversed at our own peril.