A History Lesson on The Cap Times 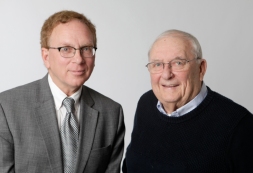 On March 28 John Nichols (left) and Dave Zweifel (right) shared with Rotarians wisdom and tales from their new book, The Capital Times: A Proudly Radical Newspaper’s Century Long Fight for Justice and for Peace. Nichols noted that as the Madison newspaper celebrates its centennial, it is still committed to the principles on which it was founded by William T. Evjue: promoting world peace, exposing discrimination and calling out corruption. Nichols noted that many newspapers don’t last 100 years, especially those that take such bold stands.

While The Capital Times is committed to these principles, it has a strict “firewall” between the reporting and editorial writing.  Evjue believed that journalism’s duty is to print the truth and the facts, but also to recognize that there is injustice and to call it out. The paper’s slogan since 1929 has been: “Let the people have the truth and the freedom to discuss it and all will go well.”

Zweifel said that Evjue quit his job with Wisconsin State Journal and launched The Capital Times when the State Journal “turned against him” in the build-up to World War I. He opposed the push to go to war, and that was enough to be labeled un-American and a traitor at that time. The Chamber of Commerce told its members not to advertise in the new paper and threatened to boycott businesses that did. The boycott cut the number of ads in The Capital Times from 46 in its first edition to none in the second edition. To fund his newspaper, Evjue started selling shares in The Capital Times to individuals, farmers in particular. The advertisers soon returned.

Nichols explained that Evjue did not want to edit or publish a mainstream newspaper. He believed the paper would not be totally truthful if it is trying to impress other journalists. He believed The Capital Times should remain independent in order to live up to its high standards for itself.

Nichols and Zweifel told a few illustrative and amusing stories from their book. For example, the Ku Klux Klan was quite popular in parts of Madison in 1920, and neither the Democratic nor Republican party would admit that the movement was based on racism. Evjue sent reporters to a KKK rally and called out the Klan for what it was.

Another tale recounts the story of a cub reporter from West Virginia — John Patrick Hunter — who was sent out to “get a story” shortly after he was hired. He walked out of the newsroom and happened to see a copy of the Bill of Rights. He copied a few lines from that, added some choice parts of the Declaration of Independence, and went out and asked people to sign it. This was in the McCarthy Era, and the first 111 people he asked refused to sign it, saying it was too radical. The story he wrote was a hit. Other newspapers lined up for permission to run it, and President Harry Truman mentioned it in a speech to make the point that people had become afraid to uphold our own American values. Nichols asserted that Hunter could easily have won a Pulitzer Prize for the story, but explained that Evjue didn’t allow Hunter to enter it because he feared the recognition by other journalists would compromise the newspaper’s independence.

Other stories in the book include the antics of reporter Cedric Parker, who would go to great lengths to get a story. One time, with a little deception, he got members of Nazi Bund to provide their names and addresses to him voluntarily at one of their organizational meetings. He once shot a photo of the owner of a Hurley gambling business standing in front of an illegal slot machine. Another time he hid the body of a drowned boater under a Lake Mendota pier to ensure The Capital Times would be first to run the story.

Our thanks to WisEye for videotaping our meeting this week.  You can watch the video here.