You HURD It Through the Grapevine

President Donna Hurd joined the Rotary Past President’s Club, riding out of office with respect, heart and warmth. Our own Rotary “Temptations” Chorus presented a Motown musical background as new members went “Driving with Donna” through a year in which they had learned that what they think, say, and do is driven by a 4-Way Test.

In preparation for today’s program, they took to the street with those 4 questions Donna helped us all to memorize in the course of the year: 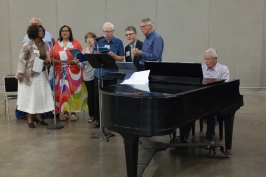 Making what they called their “Four-way Stop,” new-member interviewers found that although  the common person on Madison’s downtown square did not know the test, some had a sense that it might have something to do with fairness or justice.  One man on the street declared, “I live by my wife’s test.” Undoubtedly that’s the truth?

Interviewed club members declared they knew their oath verbatim. Yet it was admitted that even longtime members might still need an occasional prompt to assure they didn’t stumble. For example, Boris Frank could not easily repeat the test by heart, but he pointed out the truth–that words were being held up, off camera, for his reference.

Motown was in the air! Donna may not have a presence on social media, but she has a great deal of what our Motown singers belted out in 70’s style: R E S P E C T.  Knowing “We are Rotary,” thank you, Donna, for being the embodiment of the 4-way test for us throughout the year. We hold it in our memories and you in our hearts. Past presidents do have respect, and that’s the truth!