Rotary’s General Secretary: “We Are All Peacemakers” 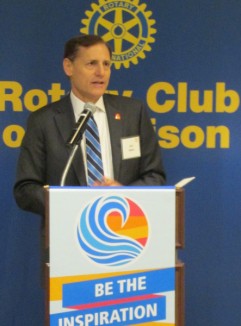 First, we must finish PolioPlus, even though we have been supporting this cause for 30 years.  Today, with the help of international partners including UNICEF, WHO, and Gates Foundation, the end is in sight.  Yes, Hewko admitted, we are experiencing donor fatigue, but we cannot move on to the next big project until we are successful with this one.  PolioPlus, he continued, has really put Rotary on the international map.  The remarkable infrastructure that we developed to deliver PolioPlus can be used for the next big campaign, he noted, but admitted that no decision had been made on what this would be.

Second, Rotary’s international membership has been stagnant at 1.2 million members for the last 20 years.  This is because membership in the U.S. has been declining, but membership in Asia and Africa has been increasing.  Faced with stagnant growth, Rotary must develop new products for today’s changing marketplace including experimenting with formats that depart from the club model.  Hewko also urged Rotarians to find ways to increase our impact on the world.   For example, our club could join forces with other Wisconsin clubs to do larger scale projects.

Third, Hewko urged us to recognize that “peace is at the center of everything we do.”  We do this by providing potable water, teaching better health practices, and eradicating disease.  Rotary International has recently joined forces with the Institute for Economics and Peace to focus grant programs on those that create the most enduring peace.

Hewko directs a staff of 800 employees at the RI headquarters in Evanston, Illinois and seven other international offices, and has served as general secretary since 2010.

Members from many Rotary Clubs in Southern Wisconsin also attended the talk.