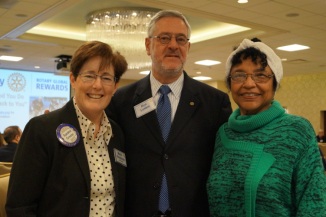 Our speaker on Wednesday, amidst a snow storm, was Dr. Muriel Simms, the author of a new book, “Settlin’: Stories of Madison’s Early African American Families,” published by the Wisconsin Historical Society Press. The dedication to the book captures its essence: “To the African American families who settled in Madison in the 1800s and early 1900s. They showed strength, courage and pride as they made a better life for themselves and for others in the community.” And Dr. Simms’ talk illustrated this with the stories of people in the book.

Dr. Simms began by speaking about the importance of the oral tradition in the Black community, and oral histories done by Dr. Simms provide much of the content of her book. She also spoke of what motivated her to write the book. She was always interested in history, and she wondered about the ancestral Black families in Madison, including her parents: her mother joined her father here in 1925.

The talk featured stories and photographs of some of the people in the book in four broad categories: military, sports, volunteerism and “other.” Dr. Simms began with a newspaper article from the Wisconsin State Journal about the return of “Buck” Weaver from service during World War II. The headline referred to him as a “Beloved ‘Red Cap’ at the bus station.” He had been killed shortly before the end of the war. She mentioned Al Dockery, a star athlete at Madison Central High; Lois McKnight, a music teacher who volunteered wherever a musician was needed; and Velma Hamilton, one of Madison’s greatest citizens. There were important Black civic groups such as the Utopia Club, the Wisconsin State Federation of Colored Women, and the National Association for the Protection of Colored Women, and the NAACP (Velma Hamilton was the first president of the Madison branch in 1943). Dr. Simms discovered many of these organizations in the issues of the Wisconsin Weekly Blade, the first Black newspaper in Wisconsin, founded in 1916 by J. Anthony Josey, who declared in his mission statement his belief that “the Negro has in his own hands his destiny.”

It was a great talk. If you missed it because of the snow, get a copy of the book and read it.