Kelly Sheffield, the coach of the UW Volleyball Team, did not speak at all about the game of volleyball. Rather, he presented his remarkable insights into human nature and the way to motivate gifted athletes to perform well despite the adversities of sport and life itself.

His talk began with a brief video of his team in action: it displayed intensity, beautifully graceful athleticism, and players having fun. The Coach then explained that his most important job was to create a culture of success. He seeks out players who are talented, but who are also willing to hear criticism and work hard to improve themselves. There are many possible excuses for failure. But fine athletes (and obviously this is not limited to athletics) will accept coaching advice and criticism and will do what is necessary to succeed. A motto he uses is: “Be a participant in your own rescue.” 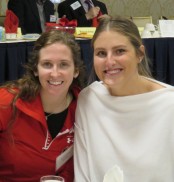 Coach Sheffield and his team did not win the NCAA Tournament this year. But he and the team subscribe to an insight offered by the late Kobe Bryant: In addition to being painful and disappointing, losing can also be “exciting.” It can inspire self-examination and a dedication to improvement. When he asked one of his players at this lunch if she had ever won an NCAA Tournament, her reply was telling: “No. Not Yet.” It seems likely that this player will win the NCAA Tournament. It also seems likely that she will win in the game of life. Kelly Sheffield is one of the greatest coaches in UW history.