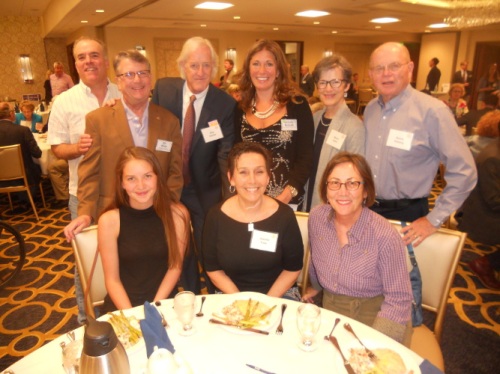 At today’s meeting, documentary filmmaker Chip Duncan gave us background information on his new film, “TOLKIEN & LEWIS – Myth, Imagination and the Quest for Meaning.”  Many members are familiar with some of Tolkien and Lewis’s works (e.g. The Lord of the Rings and The Chronicles of Narnia) from their childhoods, but at that period in our lives, we likely did not contemplate some of the profound topics raised in today’s talk.  In contrast, Duncan’s film seeks to explore broad religious and philosophical issues that have evolved through myth and ritual and that were of deep personal interest to both authors.

In the early twentieth century, Tolkien and Lewis were well-known Oxford academics and authors who were friends and members of a literary club called “The Inklings.”  In 1931, Tolkien invited Lewis and fellow Inkling Hugo Dyson to dinner, and an eight and one-half hour discussion followed that resulted in Lewis’s conversion to Christianity.  Key to this conversion was an examination of the powers of myth and ritual and how they can lead an individual to his/her belief in a “truth,” as manifested in a belief in a religious or philosophical system or lack thereof.  Of course, this is a deeply personal and unique exploration that everyone must make on their own, and this film suggests individuals use imagination as a necessary tool to make that journey.

“TOLKIEN & LEWIS – Myth, Imagination and the Quest for Meaning” will be shown nationally on the Public Broadcasting System (PBS) this fall.

On a personal note, my wife and I have visited an Oxford pub, “The Eagle and Child,” which started serving customers in 1650.  Tolkien, Lewis and The Inklings regularly met there, and referred to the pub as the “Bird and Baby.”

If you missed our meeting, you can watch the video here.