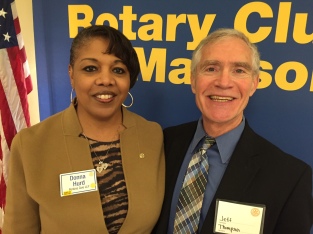 Anyone who has spent any time in a hospital – as a patient, visitor, staff or volunteer – is aware of the high use of fossil fuels needed to heat, cool, light and operate equipment in these buildings. In fact, our November 30 speaker, Jeffrey Thompson, noted that a hospital is 2.5 times as energy-intensive as a hotel or other commercial building of the same size.

As CEO of Gundersen Health System in La Crosse from 2001 to 2015, Thompson led the organization through a rigorous and successful initiative to reduce its carbon footprint. They did it, he said, to advance their organizational mission to improve the health and well-being of Gundersen’s patients and communities. There were three objectives behind the effort: 1) to boost the health of the local population; 2) lower the overall cost of care; and 3) improve the experience of care at Gundersen.  A goal from the beginning was to accomplish this without passing the costs on to patients.

Emissions from the fossil fuels burned to power hospitals and clinics cause a myriad of public health problems, including cancers, liver and kidney disease, reproductive issues, respiratory disorders, cardiovascular disease and strokes. In addition, hospitals produce hazardous wastes, including pharmaceuticals, which pollute our waters.

With 7,600 employees, 61 clinics and six hospitals, Gundersen now is internationally recognized for its energy conservation and innovation. It operates the only energy-independent hospital in the world.

Thompson stressed that not only was the initiative the right thing to do, but it has been financially successful as well. To fund the initiative Gundersen diverted five percent of the assets it otherwise would have invested in stocks and bonds. The project led to significant savings and an impressive return on this investment.

Gundersen has increased its recycling rate to 40 percent, compared to a national average of less than 10 percent. They have cut cafeteria food waste by 80 percent, preventing approximately 18 tons of food from going to the landfill each year. They have established a donation program for leftover food that provided more than 6,000 meals in 2014. They have reduced hazardous pharmaceutical waste 17-fold.

Conservation should be our first fuel, said Thompson. It is the best place to start and offers the best returns. The Gundersen team looked for conservation opportunities in every aspect of their operations. The hospitals and clinics now are 53 percent more efficient than in 2008.

Gundersen has launched a biomass boiler, a geothermal field, and landfill and dairy biogas operations. They have installed solar hot water and wind power. Working with county government, they now heat and cool one campus completely with biogas from a landfill.  Thompson said this project had a three- to four-year return on investment for the county, and a seven- to eight-year return for the health system.

Thompson has been invited to the White House, the Paris climate talks and Beijing to talk about energy conservation. But he said there is much we can do to conserve energy without even waiting for government to act. The Gundersen project, he said, can be scaled down to the personal level or expanded across different industries. He encouraged people to do more to conserve energy in their personal lives. He also noted that if healthcare, schools and the business community acted together, they could vastly improve the well-being of most of our population.

Did you miss our meeting this week?  Watch the video.

Have the Conversation and Do It Now… 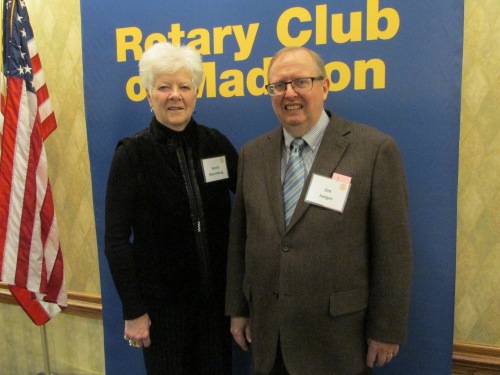 Jim Jaeger and Sandra Nuernberg urged all Rotarians and guests to begin the process of planning for future medical care.  Jaeger and Nuernberg represent the Association of Spiritual Caregivers working with Meriter Foundation and the Gundersen Medical Foundation in La Crosse.

Jaeger and Nuernberg showed a video about a couple who were having the conversation.   Benefits include peace of mind, putting your family at ease about what decisions to make for you when you are unable, having an agent to represent you who is willing and capable of advocating your wishes on your behalf.  And knowing what you want done at end of life will potentially save money and extend life by taking the pressure off.

Jaeger noted that Advance Care Planning is a process, beginning with you and others understanding that decisions will need to be made in the likely event you will not be able to do so.  Next you need to reflect on what you do want to happen, then have a discussion with loved ones, medical advisers and agents about your wishes.   Those choices will be written down and then this should be part of your medical record.

Also, plan to review this document over time as your situation may change and you may want to alter your plans.  There are resources and organizations to help you have “the conversation”.   For an information booklet answering commonly asked questions about advance care planning, contact Gundersen Health System,
La Crosse, WI 800-362-9567, ext. 56748.