“What Good Shall I Do Today?”

First, the surprise news:  District Governor Bill Pritchard asked the president of each club in our district to select a “Yes Person” for recognition by Governor Pritchard, a person who always says “yes” when needed.

President Jorge selected Brian Basken, who assembles weekly the YouTube meetings we view as a cohesive whole.  Each club’s recipient will receive a journal imprinted with Benjamin Franklin’s words “What good shall I do this day?”  And one among the many named recipients will be given a free trip to the June 2021 Rotary International conference in Teipei, Taiwan.  Congratulations and thanks, Brian!

Governor Pritchard is no stranger to our club.  A “numbers guy”, he recited statistics of our attendance, membership decline, and diversity, as well as key metrics of exemplary participation in fellowship groups, charitable giving and community support, and generous contributions to District 6250 and Rotary International.

He addressed the current “new virtual normal” and the need to pivot in our long-term approach to club needs with a “hybrid future” that may provide useful flexibility in our operations.

Governor Pritchard also urged us to hold new members’ attention into the critical three-year member mark that cements interest, by ensuring that each new member’s expectations are deliberately discerned and addressed.

If you haven’t seen the Governor’s speech yet, it’s worth watching.  Those with questions for Governor Pritchard may send them to Jorge or the Rotary office so that they may be shared with the Governor next Tuesday when he attends our club’s Board meeting.

Our thanks to District Governor Bill Pritchard for his presentation this week and to Ellsworth Brown for preparing this review article.  If you missed our meeting this week, you can watch it here:  https://youtu.be/Ffee29ggI6I. 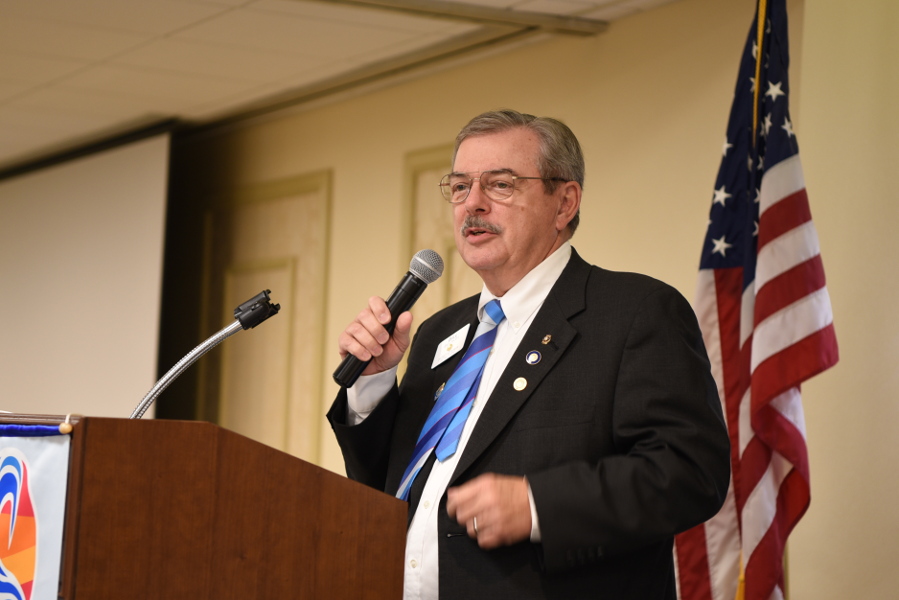 Bill Hoel, Rotary District 6250 Governor, inspired Rotary Club of Madison members to show their Rotary pride. Hoel suggested that Rotary is recognized worldwide for the success of its many programs carried out by its more than 35,000 clubs and 1.2 million members in over 200 countries. He further explained that the clubs are grouped into 529 districts and 34 zones. Rotary continues to grow in numbers, more in other continents than in North America. The  Rotary International website showcases projects that have been completed around the world.

The biggest project ever undertaken by Rotary is the Polio Eradication program that has a goal of total eradication of the polio virus.  No other major project will be undertaken until no more cases are reported and until no virus can be identified in samples of wastewater for at least three years. Although isolated cases are still being found in a few countries in Asia and Africa, occasional cases are reported in the U.S. One such case was recently reported in Minnesota from a boy who had visited a Canadian Amish settlement that had not received the polio vaccine.

Hoel also emphasized that cooperation between Rotary clubs and other organizations is important. Rotary has permanent representatives in the United Nations and indirectly with its subsidiaries such as the World Health Organization and the World Food Program. He described two efforts that involved Wisconsin clubs, one in 1986 and one in 1989. The first involved a period of starvation in Ethiopia, in which a concerted effort enabled tons of dried whole milk to be sent by planeload and cargo ship.  The second, called Hands Across the Heartland, sent food to Moscow during a period of famine.

Hoel suggested that Rotary Pride for all its accomplishments should inspire others to think of becoming a Rotarian. Because of its manpower, Rotary Club of Madison has many accomplishments to be proud of, but it may be able to do even more by collaborating with other clubs in the district.  He invited members to attend the 2019 District Conference, June 7-8, at the La Crosse Center. 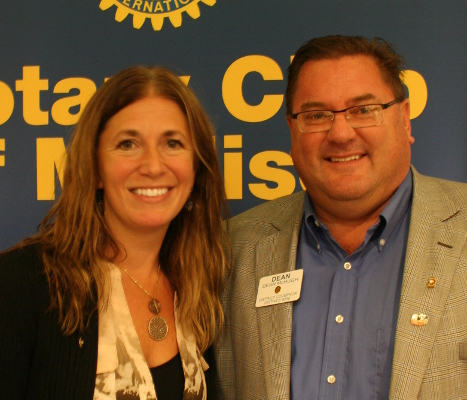 Dean McHugh, District Rotary Governor, addressed the October 12 meeting of the downtown Rotary as one of his 63 talks of the year.  Dean is from Holmen, a club of 38 members and ten years old, where he runs an excavation business with his father. Dean shared three stories, powerful to him, that illustrated why Rotary is important.

Dean’s first story was that he was asked to Rotary meetings twice before he attended, because he didn’t see the value proposition immediately.  They didn’t give him the complete story, so he declined.  Having been a foreign exchange while at UW-LaCrosse, he was in Colombia for 7 months.  He came home with a greater understanding of the world, with a love for a second country and with a second family.   “Holmen Rotary tapped that interest, asking me to help with our exchanges, so I joined,” he said.

Second, Dean told the story of a signature Rotary project that caught his attention.  Holmen Rotary raised $7,000 for a project in Lima, Peru.  This was turned into a $25,000 through Rotary matching funds.  They used bio sand water filters to give 15,000 people clean water.  They have now done five clean water projects impacting up to 50,000 people.  “It’s powerful to go see what one small club can do in the world,” McHugh said.

For his third story, McHugh told of trying to recruit Scott Ryan, a friend of 40 years, to join Rotary.  Ryan attended eight meetings before joining, thinking he wasn’t qualified.  Scott joined, but didn’t really become a Rotarian until he went on a Peru trip.  His daughter sent him hair clips to take to people he met. When distributing them, the girls hugged him; he saw they appreciated his caring and he wept.  It was a real Rotary moment.  Scott went on to become youth exchange officer and then club president.  He started four new clubs and is now a district officer.  McHugh says, “I’m proud I gave him the gift of Rotary.”

Dean warned 10% of members drop out each year and challenged the club to bring in at least 50 members.  He closed with, “May Rotary friends and Rotary ways continue to help you serve.”

If you missed our meeting this week, watch the video here.

Be a Gift to the World

–submitted by Stan Inhorn; photo by Will Anzenberger

On September 23, Rotary District Governor Mary Van Hout described her personal relationship to Rotary and the many ways it has affected her life. She said that one word “Give” defines how her Rotary membership has affected her civic involvement.    Many people are wary of becoming involved or giving of their time and money to philanthropic organizations but they underestimate the benefits that accrue.

This year’s Rotary International motto is “Be a Gift to the World.” This motto emphasizes the five core values of Rotary:

Mary learned many of these values growing up in a small rural area in Wisconsin where she observed how neighbors helped each other by working in teams to carry out their chores. When she was 10, her mother died, and neighbors displayed random acts of kindness to Mary and her several siblings. In 2000, Mary learned about the Rotary Orphan Train Project, and she took her first international trip to Guatemala. The Rotarians’ intent was to institute a computer program, but the Catholic sister in charge of the orphanage insisted that the money could be better used to build a poultry barn. The girls would then learn how to grow their own food as well as developing business skills. Since this trip, Mary has pursued many other international service projects. She implores Rotarians to balance the “Giving” word with “Getting” as you consider the many benefits of Rotary membership.

My wife, Jan, and I recently attended a Rotary International Youth Exchange function, NAYEN 2014.  Jan will be assuming a leadership role as District 6250 Youth Exchange Chair in July.  As such, Jan wanted an opportunity to become more immersed in the protocols of Rotary Youth Exchange at the NAYEN conference.  While we were there, I was invited to help train the facilitators for the Multi-District Central States Youth Exchange conference this summer for the Rotarians who will be helping the returning rebound students cope with reverse culture shock.  Hopefully, we can give them a better ability to act as ambassadors of their former host countries to their home communities here in the United States.

The conference lasted from late Wednesday through early Sunday and addressed safety protocols, culture shock, conflict resolution and how to improve the experience of all our youth before, during and after their exchange experience.  During our time there we attended seminars, plenary sessions and workshops.  We met others of the 410 attendees from over 23 countries.  Social activities occupied the evenings.  We also had the pleasure of connecting with the former Youth Exchange Student to Oregon, Wisconsin, from Cancun, Carlos, as well as his parents and sister.  Carlos’ father, also Carlos, is the President of the Rotary Club of Cancun…  It is a small world.

The single most inspiring aspect of the conference was seeing the passion that is shared around the world by and for our Youth Exchange Ambassadorial Students.  We learned of many stories and shared our international cultures with others throughout the five days we were in Cancun.  Rotary… A positive influence the world around!