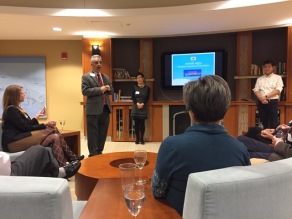 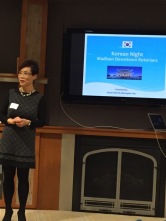 We were treated to a bountiful buffet of Korean dishes catered by Sol’s on the Square. The challenge was not to overload each plate as the choices were intriguing and many. When Soyeon gave us a preview of the menu, she noted table-top cooking is common in Korea. I heard diners rave about the sweet potato noodles, a seafood, pancake-like presentation with soy sauce, bean sprouts and spinach steamed with sesame oil, and a wonderful surprise –potato salad with cucumbers.

Not surprising, but equally inviting, was the dish that most of us knew at least by name –kimchi a traditional, somewhat spicy Korean dish of fermented vegetables, often including cabbage and daikon radish.

At the end of the meal, another surprise:  a plate full of delicious cream puffs, made by our event organizer, Majid Sarmadi, was the perfect touch!

The after dinner program was a thoughtful, insightful “storyboard” culled from about 80 slides highlighting Korean culture. It was presented by our hosts who met in the U.S., but each was born and raised in Korea.

We learned that South Korea, about 30 minutes by air from Japan, is surrounded by “big power.” Soyeon’s mother lives within about 20 miles from North Korea, but the hosts said people in South Korea, for the most part, go about their daily lives without constantly looking over their shoulder.

The country which is about the size of Indiana has the 11th largest economy in the world. “We don’t have any natural resources,” Soyeon said. “Our resources are human resources.”

She illustrated that by noting that 80 percent of high school grads go on to college. “The country is obsessed with education,” she said. But that level of stress comes with a price. Of the 35 member countries of the Organization for Economic Co-operation and Development (OECD), South Korea is No. 1 in suicides.

For those thinking of visiting South Korea, photos of the country’s beautiful landscape were stunning, magical and alluring.  First-time visitors might also see people bowing to each other. “This is one way we show respect for each other; in business and in personal relationships,” said Soyeon.

So much to learn in an evening, but it was a great start to discovering the intricacies of Korean culture.