Gaining the Right to Vote for Women

Our Rotary speaker on February 17 was Ellen Antoniewicz, youth experience coordinator at the Wisconsin Historical Museum. She walked us through the 72-year struggle to pass women’s suffrage, with an emphasis on leaders and actions in Wisconsin.

Antoniewicz read portions of a 1776 letter from Abigail Adams urging her husband, who would soon become President, to “remember the ladies” in the new code of law. Abigail wrote: “Remember, all men would be tyrants if they could. If particular care and attention is not paid to the ladies, we are determined to foment a rebellion and will not hold ourselves bound by any laws in which we have no voice or representation.”

“Of course, the original leaders did not remember the ladies,” Antoniewicz said. “Nor did they remember the indigenous Americans or enslaved peoples or anyone who was not a white male property owner.” While the rebellion that Abigail Adams predicted did not result in a raid on the Capitol, it did lead to a sustained movement which ultimately did expand the franchise.

As Wisconsin gained statehood in 1848, Elizabeth Cady Stanton and Lucretia Mott were organizing the Seneca Falls Convention. This gathering took words from the Declaration of Independence and added two more: We hold these truths to be self-evident, that all men AND WOMEN are created equal…”  While most of the original suffragists did not live long enough to be able to vote, Antoniewicz mentioned a 12-year-old Wisconsin girl who attended the Seneca Falls Convention and was finally able to cast a ballot at the age of 84.

The women’s suffrage movement was often divided by race, class and political view, but it was united in the belief that voting is a fundamental citizen right. Antoniewicz said it is unfortunate that civil rights groups have sometimes been pitted against each other, as if when one group gains rights it means that another group’s rights have less value. For example, Susan B. Anthony, speaking in Janesville, said that white women deserved the vote more than Black men because they had a higher level of education.

Yet Black women and men were vital to the movement. Sojourner Truth, who settled across the pond in Michigan after escaping slavery in the South, spoke of gender equality — with a degree of humor — when she said: “I can’t read but I can hear. I have heard the Bible and have learned that Eve caused Man to sin. Well, if Woman upset the world, do give her a chance to set it right-side up again.”

For her, it was a matter of basic human dignity and decency. Women’s rights were not just for literate white women, but for all women.

Most suffragists were active on a number of issues, including labor laws, child welfare and temperance. That’s why they wanted to vote and have a voice in policy, said Antoniewicz. In Wisconsin, women journalists gave voice to these concerns, including the journalists Emma Brown of Ft. Atkinson and Theodora Youmans, with the Waukesha Daily Freeman.

A statewide ballot referendum in Wisconsin in 1912 proposed to grant women the right to vote, but it was defeated at the polls largely because of a strong anti-suffrage lobby led by the brewing industry, which used the threat of temperance to scare voters — all of whom were men.

Meanwhile the focus of the movement shifted away from state laws and to the passage of an amendment to the U.S. Constitution. Antoniewicz told the story of State Senator David James, who rode the train from Madison to Washington, DC, to hand-deliver our state’s ratification of the amendment, just beating out Illinois to be the first to ratify. (But don’t expect your Illinois friends to agree about that, said Antoniewicz.)

Antoniewicz discussed other suffrage movements including those for Native Americans, African Americans and other groups. These have led to such landmark laws as the Indian Citizen Act of 1924, the Voting Rights Act of 1965 and the 26th Amendment which lowered the voting age to 18.

Antoniewicz said that the legal right to vote does not always guarantee equal access to the polls. That is something that advocates and lawmakers must continue to work on.

Rotarian Carol Toussaint pointed out following the program that Carrie Chapman Catt, born in Ripon but living in Iowa as an adult when she was active in the suffrage movement founded the League of Women Voters immediately after the Amendment passed.  She is quoted as saying: “We have won the vote; now we must learn how to use it.”

Our thanks to Ellen Antoniewicz for her presentation this week and to Andrea Kaminski for preparing this review article.  If you missed our meeting this week, you can watch it here:  https://youtu.be/l2bH9bhL1wM. 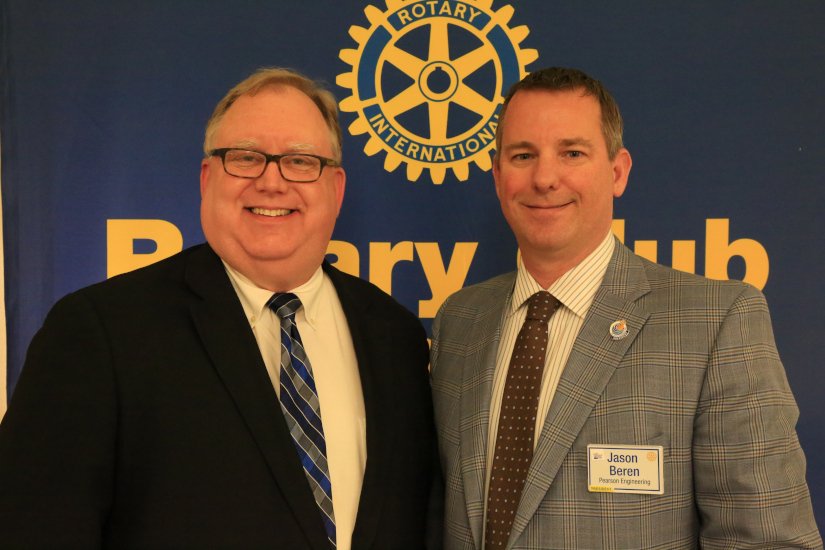 Christian W. Overland has been the Director of the Wisconsin Historical Society since his appointment in February 2018.  He came to Madison from sixteen years in various positions at The Henry Ford Museum, in Dearborn, Michigan.

Overland has stepped into the position at an exciting time.  He and the Wisconsin Historical Society are planning to develop a new museum that would nearly double the square footage of the current facility on the Capitol Square at Mifflin and State Street.  It will be a $120 million public/private funding effort with the state funding $70 million and private funds providing the remaining $50 million. The story is unfolding in several chapters.

Chapter one started with the recently completed Wisconsin Historical Society archive facility on the east side of Madison that houses more than 200 million artifacts. It includes a large North American history collection that is second only in size to the archives in the Library of Congress.

Chapter two now connects that history through events and digital access for every citizen in the state. The new museum will be transformational by boosting access to many thousands more visitors.  Those stories will be shared around the state and around the world.

With additional space, Overland believes that exhibition and educational activities could be expanded with new state of the art technology providing visitors and students a unique ‘Wisconsin experience’.

Overland said that public input into the ideas, plans and content is critical to a successful project.  To that end, the Historical Society is setting up multiple events across the state to get input. “Every community needs a voice,” Overland said.

Our thanks to WisEye for videotaping our meeting this week, and if you missed our meeting, you can watch it here.