The Face of Edgewood College is… 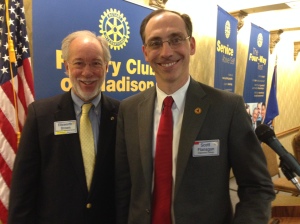 Scott Flanagan is the 7th President of Edgewood College, after spending 16 years at the college as a teacher and administrator.  Today he gave us an overview of the college.  Begun in 1949 under the leadership of the Dominican sisters, Edgewood College has grown to more than 3000 students in many undergraduate, graduate and non-traditional programs.

President Flanagan recalled that in 1970 the college went co ed and announced this change through a road sign “Now Co ed.”  He surmised this change was not met with enthusiasm as the sign was quickly stolen.

Today the sisters’ legacy is carried out through the good work of all associated with Edgewood; students, faculty and staff, the board of trustees and even the presidents, past and present.

Edgewood College was one of the first in the country to offer the “yellow ribbon” program, an opportunity for veterans to attend college on scholarships.  Today more than 150 vets are attending Edgewood.

Edgewood primarily educates students from the greater Madison area, and they stay in the area after graduation.  Flanagan proudly pointed to the fact that only 3% of 2013 grads were still looking for work; 97% were working, in the military or doing graduate work.

He also talked about the programs for returning students seeking professional advancement through Edgewood programs, serving traditional and non-traditional students and invited everyone to the “Stream,” Edgewood’s new arts complex.

It’s Wisconsin, so Flanagan mentioned the 15 sports programs at the college, the robust study abroad program, the community internships which take students out into the community for service and civic engagement, offering more than 200,000 hours in service.