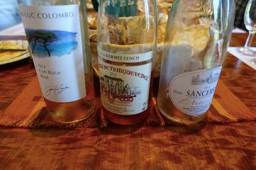 We started with three Roses: A Rhone from Jean Luc Colombo; a Kermit Lynch Tavel (AOC devoted entirely to Roses); and a Sancerre with 100% Pinot Noir.  The resounding best was the Sancerre L’Authentique by Thomas Labaille in the Loire, sourced from Steve’s Liquor on University Avenue at a cost of $20. 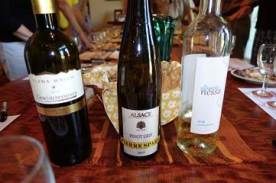 Next we had bubbles, a typical heat re-mediating wine, all made by the Methode Traditionale, but no actual Champagne.  The first was a french sparkler made the traditional way – Blanquette de Limoux.  The claim to fame of this region is that that is where reports of bubbly wine made here 100 years prior to bubbles from the Champagne region.  This wine is made from the Mauzac grape known as Blanquette, and they tend not to remove the sediment (lees) so the wine could be cloudy.  Next we tried a Cremant (name for French wines made in the traditional champagne method but not in the Champagne region) de Bourgogne.  Finally from the Antipodes we tried a Tasmanian sparkler, made in the traditional method that Downunder they call “Tasmanois”.  The winning wine was the Limoux by St. Hillaire with a nearly 100% winning rate.  This wine was a little unusual as the other sparklers were NV, but this was a 2014 vintage and the company is one of the top 5 rated Limoux annually ~ a top 100 WS rating and the cheapest of all these sparklers.

We then shifted to still whites, and had a European mixture. First, from the Sudtirol, Elena Walch’s mild Gurwerztraminer that we had had before at a Wine Table tasting, and this wine is made by the Queen of Gurwertztraminer, Elena.  This was followed by an Alsation Pinot Gris, then an Albarino from Nessa in the Rias Baixus of Spain.  The Unanimous winner was the Pinot Gris from Pierre Sparr.  This is interesting as Pinot Gris is identical genetically to Pinot Grigio just made differently, and this is especially so in Alsace where all Pinot Grigio is marketed as Pinot gris where secondary fermentation and the use of oak aging is common making the wine more complex than the usual acidic Italian Pinot Grigio. It is interesting that Pinot Gris (and Grigio) and Pinot Blanc, are all point mutstions of the very old Pinot Noir (1000 year history of cultivation compared to 200 years of Cabernet Sauvignon) so they are white wines very similar genetically to Pinot Noir.  Also, this maker is a very old Alsation winemaking house that fell on poor times and winemaking, so the local vineyards grower cooperative decided to buy the winemaking facility to ensure their grapes were well made, and the winemaking improved.  All these wines were excellent but this wine was superb – obtained at Steve’s at about $18.

The best was kept to last.  The idea had been to try Sangria and Shandies.  Meryl told the story of Glunz Winery making most of the money they needed to run their winery from the sale of Sangria to CostCo, and when the Mixtackis and Wilsons had visited Glunz in Paso Robles, we met the winemaker AND his dog.  Mike Wilson adapted the mixture, by adding 10% of a blood orange liqueur to the Sangria and forgoing all the fruit typical of a Sangria as the winemaker has added all that effect already – this was a crowdpleaser and at <$10 for the de la costa Sangria by Glunz Cellars and ~$27 for the Solero Blood Orange liqueur (one bottle allows for innumerable sangrias given the liqueur dosage is 10% of the entire drink (10:1 ratio of Sangria mix:liqueur).

We also tried two Shandy’s; a Pitosi lemonade beer and a grapefruit Schofferhoffer, which were very good.  Back home in NZ 50 years ago we added lemonade to our favorite beer on a hot afternoon to get a refreshing drink.  Here in America you can add Sierra Mist to your favorite beer or just purchase these Summer Shaddies.  A Good Time Was Had By All.

All in all, an excellent “Fun in the Sun”day, and while all the wines and drinks were excellent there were clear winners to everyone, and everyone agreed with that.