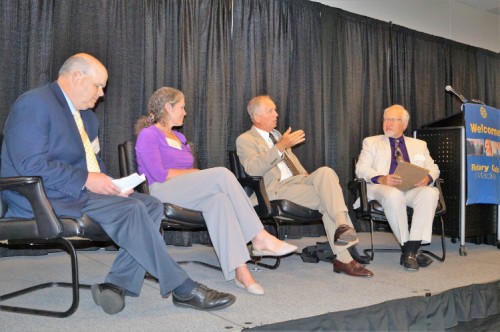 Few Wisconsin voters understand what tax incremental financing (TIF) is, but since its introduction in 1975, it has proved to be one of the most powerful and effective urban development tools in Wisconsin’s history.  On Wednesday members were privileged to hear a panel explain this poorly understood topic.  Speakers were: Dan Thompson, former executive director of the Wisconsin League of Municipalities;  Natalie Erdman, Director of the Madison Department of Planning, Community and Economic Development; and Mike Barry, Assistant Superintendent for Business Services for the Madison Metropolitan School District.  The panel was artfully moderated by Steve Walters, with WisconsinEye.

Thompson reminded the audience that by the 1970s the suburbanization of homes and factories left huge swatches of once valuable central city land vacant and blighted.  City leaders sought financial incentives to revitalize downtowns and closed-in neighborhoods.  This was why Governor Patrick Lucey encouraged the legislature to approve a TIF law for Wisconsin.

Erdman explained how the law works by using Tax Incremental District #36, known as the Capital East District.  She noted how this sprawling area along East Washington Avenue from Blair Street to the Yahara River, long known for its car dealerships, had great potential.  However, developers could not undertake projects there because squishy soil required expensive foundations and contamination from old factories had to be remediated.  When the City created TID 36 its real estate was assessed at $75 million.

To realize the district’s extraordinary potential, the City developed a comprehensive plan. Projects included expensive high-rise mixed use projects such as The Constellation and the Galaxie, the renovation of Breese Stevens Field, street improvements, and Central Park refinements.

By 2015 assessed values of land and improvements in TID 36 had soared to $132 million and many more large projects are about to break ground and are being planned.  This huge increase in real estate values caused an additional $1.5 million to flow into the city treasury every year.   Under tax incremental financing these increased taxes are used to pay back the City’s front-end development costs.

Barry explained how school districts and cities work together to enjoy the increases in real estate taxes generated by tax incremental districts.

“Thank God for tax incremental districts,” exclaimed Rotarian Bob Miller who is also mayor of the city of Monona.  “Without it we would be in a sorry state.”  Miller explained how his suburb was able to use TIF to do a $20 million upgrade to Monona Avenue.

For more information on TIF visit this link: https://www.revenue.wi.gov/slf/tif.html

Our thanks to Michael Barry, Natalie Erdman and Dan Thompson for serving on this TIF panel with Steve Walters of WisconsinEye moderating.  We also thank Dave Mollenhoff for preparing this review article and WisconsinEye for videotaping.  CLICK to watch the video.