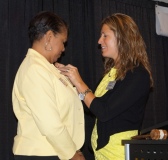 June 29 was the annual Changing of the Guard “Roast” of outgoing Club President Ellsworth Brown hosted by Club members who have joined during the past year, a.k.a. the Roast Committee.  All agreed it was very creatively staged and “hit all the right notes.” Several veteran members said it was among the best they’d seen.

President Ellsworth Brown began the program thanking the Rotary Office staff and those who supported him during the past year: his wife Dorothy, Assistant Julie Schultz and members of the club.  He thanked the Club for it’s commitment, action, willingness to say “yes” and volunteerism, ending with a quote from Yogi Berra, “It isn’t the heat that gets you, it’s the humility.” 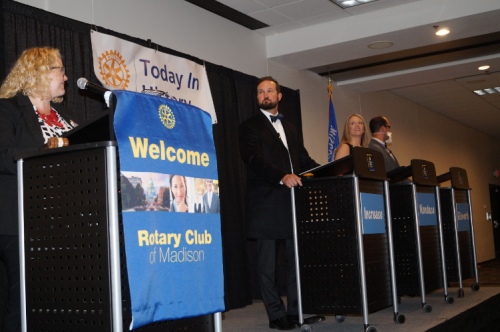 The Roast was a Jeopardy-style TV game-show theme.  Of course, one of the contestants was 50-week reigning champion Ellsworth “Brownie” Brown.  The show kicked off with a video from Reno, Nevada, of a trauma helicopter pilot, Ellsworth and Dorothy’s son, Lincoln, and his wife Tia.  Lincoln then made a surprise entrance in his flight suit.

The game show’s categories of Jeopardy-style answers included Early Ellsworth, Hysterical Society, Rotary Rites of Passage, 50 Shades of Brown and Word of the Day.  Of course, the winner was Ellsworth Brown. 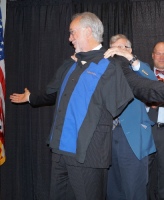 Winner’s prizes included a collection of pens donated by Club members (to enhance Ellsworth’s own collection), a historical pen from a sycamore tree at the place President Lincoln and General Grant once met, and a special edition of the Isthmus with Ellsworth’s caricature on the cover. 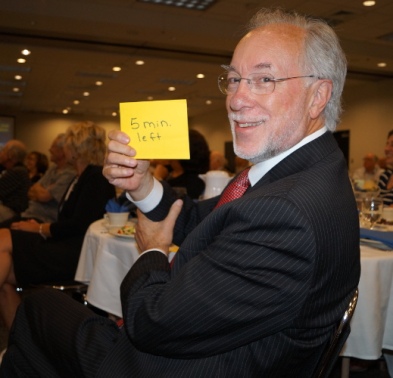