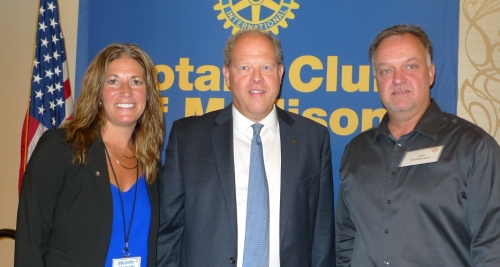 Jon Miskowski, director of Wisconsin Public Television, prefaced his presentation of WPT’s documentary on Mildred Fish-Harnack by noting that public broadcasting, which was born on the UW-Madison campus, is celebrating its 100th anniversary in 2017.

The WPT documentary begins as a love story on the UW-Madison campus in1929 when young Mildred Fish, a recent grad and now faculty member, met Arvid Harnack, a Rockefeller Scholar from Germany. After canoe trips to Picnic Point and leisurely walks down State Street, they married. Then Mildred accompanied Arvid back to Germany and the academic life of Berlin University.

Soon her letters home began to tell of her alarm at the rise of the ruthless dictator Adolf Hitler. From the documentary we learn: “At great risk, Mildred used her teaching job to recruit students into the Nazi resistance. The resistance network also included Lutherans, Catholics, Jews, social democrats, Communists, and aristocrats, anyone who objected to the Nazi dictatorship.”

When Arvid and Mildred eventually got swept up in the Gestapo purge, Mildred had in her pocket an open ticket to the U.S. but she had passed up the chance to escape. She said that her love for Arvid and for the German people would not allow her leave.

After sham trials, Arvid and, several months later, Mildred were executed. Mildred became the only female to be executed on direct orders of Hitler.

Annually, September 16th commemorates the incredible courage of Mildred Fish-Harnack with a Wisconsin school holiday in her honor.

The video and related material can be found at: http://wpt.org/nazi-resistance/main .