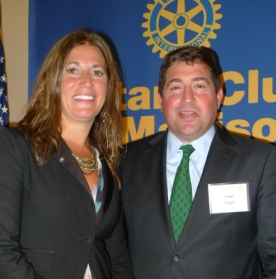 A complete transformation of our state’s professional basketball team, the Milwaukee Bucks, should lead not only to an eventual NBA championship but also a turnaround for a significant portion of the downtown Milwaukee area.

At the September 21 Rotary Club of Madison meeting, Milwaukee Bucks Team President Peter Feigin characterized the Buck’s current development and construction project as one that is “30 percent about the Bucks, and 70% about getting people to be in downtown Milwaukee.”

Feigin outlined construction projects of a 30-acre neglected downtown Milwaukee area to include a new 16,500-seat arena (to replace the old Bradley arena that eventually will be demolished), a practice facility, a health center, parking areas, and an entertainment block featuring a plaza, a potential hotel, and restaurants. The arena will also double as a venue to attract big-name concerts that have eluded the state in recent years.

Matching the NBA’s global reach as is evident in over 100 international athletes playing for NBA teams and games being broadcast in 215 different nations, Feigin announced the Bucks’ “mission to be the most successful and respected sports and entertainment company in the world.” This new mission originates in a new ownership group “that just purchased a 50-year-old team that we are treating as a start-up venture.” As concerns a specific vision for the competitive prospects within the N.B.A., Feigin boldly proclaimed the goal to win a world championship rather than just “being a winning team.”

The mentality of a start-up, according to Feigin, is needed because “we have lost a generation of fans….we have been a bit dormant.” He added that Wisconsin, based on UW’s recent basketball successes and otherwise long-standing traditions, “has a basketball culture we need to nurture.”

When asked by Club members of the team’s social responsibilities and obligations, Feigin referred to Milwaukee as “one of the most racist and segregated cities I have seen,” citing a need for better practices in inclusion, diversity, and leadership. “We are determined to get involved.”

Did you miss our meeting this week?  Watch the video here.