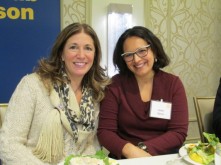 Those at the Club’s first meeting of 2017 were entertained and informed by the presentation of Jessie Garcia on Wisconsin-connected Olympians from her recent book “Going for Wisconsin Gold:  Stories of Our State Olympians” (Wisconsin Historical Press).

Ms. Garcia is the state’s first female sports anchor, and her life as such included such activities as changing a baby’s diaper in the tunnel at Lambeau Field during a Packers game.  Her book on the Olympics covers stories of many of Wisconsin’s 450 Olympians beginning with the second modern Olympics in 1900 in Paris where native Wisconsite Alvin Kraenzlein not only became the first and still only track Olympian to win four gold medals in individual track events but also introduced the method of taking hurdles in full stride!  In 1904, in St. Louis, Oscar Osthoff, son of the founders of the Osthoff resort in Elkhart Lake medaled in weight lifting and George Poage became the first African-American to medal for the United States.

At  the infamous Berlin Olympics in 1936, Ralph Metcalfe of Milwaukee raced with his friend Jesse Owens, taking the baton from him in a gold medal relay performance.  The Club was treated to a clip from this event (narrated in German).

In 1988, Dan Jansen, who had promised his sister, who had just passed away from cancer, that he would win a gold medal in skating for her, fell down and could not achieve that goal.  However, he did win the medal in the 1994 Olympics and celebrated by skating with his young daughter in the victory lap.  At the 2008 games in Beijing, the US team won what is generally considered the greatest swim race in Olympic history, winning by the length of less than a fingernail, thanks in part to a great second lap by Garrett Weber-Gale of Wisconsin.  Also thanks to a strategy by the team’s anchor swimmer that allowed him to overcome a considerable lead by the French swimmer to win the race.  Jessie Garcia told Club members this heretofore secret during her talk but perhaps that is best left for others to learn from her book, something she told members to do about several scandals from various Olympics that she noted without detail in the course of her remarks.

Ms. Garcia emphasized her love of sports and especially the Olympics but it was unnecessary to state that since this came through emphatically throughout her presentation.  As she noted, the stories in her remarks are only a small sample of those in her book.  The record of medals and games can be obtained from reference books and web sites (she maintains an updated web site about Wisconsin Olympians but the human element behind them is not there but does emerge in her book.