Wisconsin on the Air 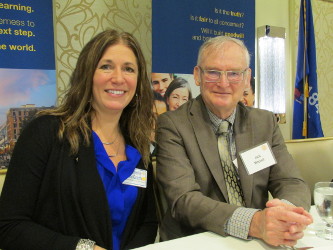 Jack Mitchell, PhD, led Wisconsin Public Radio for 21 years, from 1976 until 1997. He was also prominent in National Public Radio as producer of All Things Considered and as a four-term member of the NPR Board of Directors.

His talk chronicled some of the 100-year history of public broadcasting in the state from his book, Wisconsin On the Air. In 1917 the UW physics department moved radio from Morse Code communication to actual voice and music transmission thanks to vacuum tubes that the department made. In an early demonstration of the new medium, an assistant physics professor invited a group of faculty, deans and friends to his home. They gathered to hear a musical recording that was played in the basement of Science Hall, travelled up a wire to a chimney of the adjacent UW heating plant, and was broadcast across town to the professor’s home. The group was not impressed.

But soon the value of broadcasting was seen as a means to several ends, not the least of which was furthering the progressive “Wisconsin Idea,” the ideal of the university as an empowering force for all state residents, Mitchell related.

Experimental station 9XM, “the oldest station in the nation” became WHA in 1922. Over the 100 years public radio, and later pubic television, faced differing opinions about its proper role. Was it a teaching exercise for broadcast students, was it a means to deliver education to the many small schools throughout the state, was it a way to educate farmers, or was it the ideal medium to enlighten state residents through the “Wisconsin Idea”?

Public Broadcasting continues to face many of the same issues it has throughout its history: control, funding, and programming philosophy. Mitchell’s book details the people and activities of that 100-year journey.