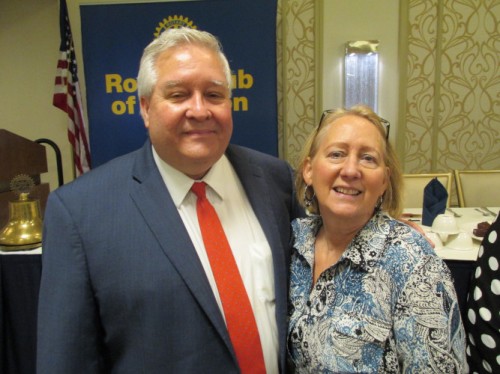 Andy and Dee J. Hall took turns Wednesday telling Rotarians about the mission and accomplishments of The Wisconsin Center for Investigative Journalism, the nonprofit and nonpartisan organization they co-founded in 2009.  The Center’s three guiding principles are displayed prominently at the top of its website, WisconsinWatch.org:  PROTECT THE VULNERABLE · EXPOSE WRONGDOING · EXPLORE SOLUTIONS.  An independent media group such as theirs is necessary, the Halls argue, because traditional media outlets like newspapers are weakening and dwindling and “no news is bad news for our democracy.”  The Center has won many awards for its rigorously fact-checked investigative journalism and is increasing the reach of its work through an extensive paid internship program. To date, 48 former interns and fellows have moved on throughout the country and the world using skills and insights they gained at the Center.  The Halls cited stories from Wisconsin exposing human trafficking, inmates in solitary confinement (in one case 27 years in a cell the size of a parking space), and concerns about football concussions as examples of the kinds of investigations their Center can conduct free of pressure to make a profit.

If you missed our meeting this week, you can watch it here.