Walking into Bar Corallini, in the Schenk’s Corners neighborhood on October 9, I had the feeling this warm, welcoming venue, with its strong Mediterranean vibes, could eventually be a go-to place where everyone would know your name.

The new restaurant, which opened in the same space where Chocolaterian used to be, has a glorious new look and robust feel and energy. The name, which means “little coral” in Italian, is also the nickname for those who live in Torre del Greco, the hometown of Corallini’s chef, Giovanni Novella.

Our five-course dinner, which included a glass of red or white wine, started with an enormous antipasti platter of items such as Prosciutto di Parma, and grilled eggplant and zucchini, which we passed around family-style. Next up, a heaping salad plate with seasonal garden veggies dressed with aged balsamic vinaigrette.

The third course, the pasta course, arrived in a large dish to be shared with all. The rigatoni alla Bolognese, created with house-made beef and pork Bolognese sauce was seasoned with fresh ricotta. The veggie choice- Pennoni alla Norma was highlighted with tomato and eggplant.

The fourth course, the entrée, was also served family style, a nice idea for giving many guests a wide number of dishes to sample. That gave us the option of having ‘seconds’ if we liked. The Pollo marsala, a breaded chicken dish and scene stealer, arrived in a creamy marsala sauce, and won high praise.

We paused then, waiting for a finale that would finish off the hand-crafted Italian dining.

So it was fitting to end the dinner with a deeply satisfying taste of dark chocolate.

The dessert course, dark chocolate sorbet, whipped up from the creative talents of Baron’s Gelato in Sheboygan, had a glistening, unique velvety texture with a super-sized taste. Accompanied by mini-cannolis, the dessert course had just the right about of sweetness that deserved to be considered the finale to this new restaurant’s line-up of featured dishes. 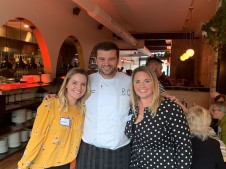 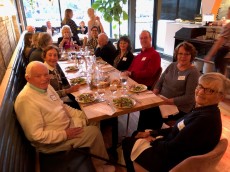 Then it was time to raise our glasses in toast to event organizer and Fellowship Chair, Rebecca Prochaska.

I heard many say it was delightful dinner in a beautifully re-defined space. It was also a good choice for catching up with old friends and initiating new friendships.