Milwaukee to Host Democratic Convention in 2020 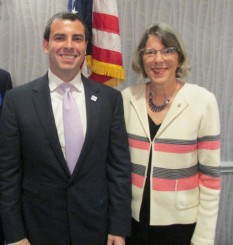 This week, Alex Lasry, who led the bid for the Democratic National Convention (DNC) in Milwaukee, spoke to the Downtown Rotarians about his experience and what this bid can mean for Milwaukee and the state of Wisconsin. Alex was initially inspired to promote Milwaukee for the DNC bid after realizing that Milwaukee was never considered for the Amazon HQ2 location. He knew all that Milwaukee had to offer and believed that if we could bring people to the city and state, there would be positive downstream impacts for years to come.

The group hired the consultant who won the last two bids, submitted their RFP and did some grassroots work to highlight Milwaukee in Washington D.C. They made top three finalists (along with Miami and Houston), and then went on to raise double the amount of money for the convention than their competitors. Supporters from all political backgrounds came from all parts of the city, community and state to back the bid.

Alex’s main takeaway was that this is an opportunity not only for Milwaukee, but the entire State of Wisconsin. He believes that it is now our duty to develop opportunities and attractions to pull the 50,000 people coming to the convention over to Madison while they’re here. We can work together to provide venue space, attractions, lodging and more in effort to show off our community.

Alex believes that the measures for success are not around the DNC itself, but instead the impact the DNC has on the state’s economy years into the future. But in order to do that, we need to give people a reason to come back.

If you are interested in learning more, volunteering or registering a venue with the host committee, visit www.milwaukee2020.com.

If you missed our meeting this week, you can watch it here.